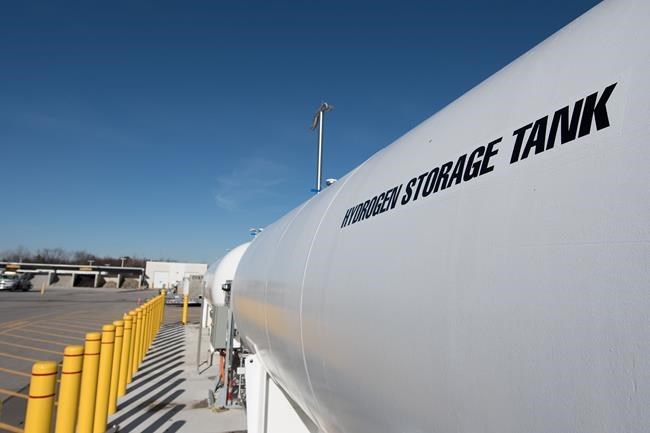 CALGARY — It seems like a no-brainer to use clean-burning hydrogen to offset the environmental negatives of natural gas for warming homes, but pilot projects to do just that starting next year illustrate nothing is simple about this trendy new energy source.

As companies consider ways to commercialize hydrogen as a cleaner alternative fuel and projects advance in Fort Saskatchewan, Alta., and Markham, Ont., most observers concede it will take time and government support to overcome its cost competitiveness issues and lack of infrastructure.

"All hydrogen is not created equal," says Tahra Jutt, director of the clean economy program for B.C. with environmental think tank The Pembina Institute and co-author of a hydrogen primer published in July.

“If you blend the lowest carbon hydrogen, you're going to get a much better outcome in terms of climate benefit."

Hydrogen has many advantages as an energy source. When it burns it leaves only water behind — no carbon dioxide or other greenhouse gases. It can be used for high-energy-intensity applications such as trucking, shipping and steelmaking. It can be compressed for energy storage and transportation. It's non-toxic and dissipates quickly when released.

But there are disadvantages, too. Its low ignition temperature and nearly invisible flame when burning pose potential safety issues. Concentrated hydrogen can damage metal, requiring enhanced protection for pipelines.

The act of creating hydrogen requires energy, whether to tear apart water molecules with the electrolysis method or breaking down natural gas molecules through thermal processes which themselves create greenhouse gases.

"The economics in our view for blue and green (hydrogen) are challenged right now but support will increase, costs are bound to come down, so (it's) another good opportunity for us to capitalize on our infrastructure," said Al Monaco, CEO of pipeline company Enbridge Inc., on a recent conference call, echoing the cautious stance taken by many industry leaders.

Almost all of the hydrogen created in Canada today is considered "grey," created by burning fossil fuel and then used in industrial processes such as refining petroleum or producing fertilizer. Pembina estimates it costs between 91 cents and $1.42 per kilogram to make.

If the carbon dioxide and other pollutants from making grey hydrogen are captured and stored, it becomes "blue" hydrogen, but the cost jumps to between $1.34 and $1.85 per kilogram.

"Green" hydrogen is separated from water using only renewable electricity and, while it is the most environmentally benign, it is also the most expensive at between $3 and $5 per kilogram, according to Pembina.

Utility subsidiaries of Enbridge and Atco Ltd. are embarking on plans to inject hydrogen into the natural gas stream leading to home furnaces and water heaters in Markham and Fort Saskatchewan.

Electricity can’t be stored as is, but at Enbridge’s power-to-gas facility in Markham it is used to create hydrogen from water that can be stored until eventually being turned back into electricity with Enbridge's 2.5-megawatt hydrogen fuel cell when needed.

Markham's hydrogen is considered green because it is made with intermittent renewable electricity. The facility opened in 2018 after investments of $4.5 million by an Enbridge partnership and $4 million by the federal government. Its operation is supported by a three-year contract from Ontario’s electric system operator to supply surplus renewable power.

The system works to level out energy availability but when more hydrogen is created than can be stored, it has to be vented, says Cynthia Hansen, president of gas distribution and storage for Enbridge.

A partial solution is to blend the surplus at about two per cent into the local natural gas stream to reduce its overall GHG emissions, a $5.2-million project (with $221,000 from the federal government) expected to begin for about 3,600 customers starting next summer.

Atco, meanwhile, is building a $6-million hydrogen blending project backed by $2.8 million in Alberta provincial grants and expected to be operational in early 2022.

It is to deliver about five per cent hydrogen in the gas stream to about 5,000 homes in Fort Saskatchewan, a small city just northeast of Edmonton, with the hydrogen coming from an unnamed local supplier.

"When it starts up it will be grey and then it will transition to blue as the supply in the area builds out,” said Jason Sharpe, Atco's general manager of natural gas, estimating it will take two to three years for blue hydrogen to become available.

The Fort Saskatchewan area, with its refineries and petrochemical facilities, is ground zero for carbon capture and storage in Alberta.

Shell Canada's Quest project, opened in 2015, has injected more than five million tonnes of carbon dioxide into underground storage from its oilsands upgrader.

The recently completed Alberta Carbon Trunk Line is a pipeline system designed to collect CO2 from industrial sites in the region and take it to mature oilfields where its permanent storage also results in enhanced oil recovery.

The global market for hydrogen could easily triple from current levels of about $200 billion per year by 2050 as countries adopt its use as a decarbonization strategy, according to GLJ, a prominent Calgary energy resource consulting firm.

Canada is well-positioned to become an exporter into this growing market because of its current and potential production, GLJ said.

Pembina's Jutt, however, says hydrogen usage should be targeted. While it may make sense to use it for home heating in some regions, that application doesn't necessarily make sense in B.C., where energy from renewable hydroelectric sources is potentially more environmentally friendly.

Much is riding on promised federal and provincial government regulatory, strategic and financial commitments to hydrogen, as well as other alternative fuels that can help Canada meet its goal of net-zero GHG emissions by 2050, she added.

"Businesses will do what's right for them from an economic perspective but I think everyone's looking to government for signals that it's good to invest in these things — hydrogen being one of many fuels that we'll need to reach our 2050 goals."

This report by The Canadian Press was first published Dec. 4, 2020.