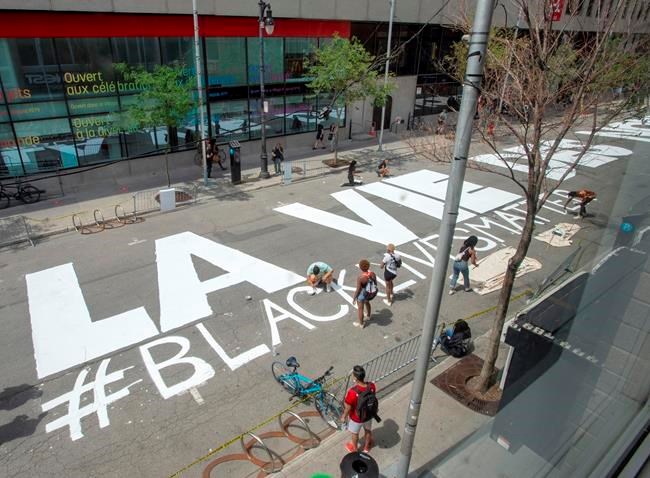 MONTREAL — The global protests spurred by George Floyd's death at the hands of police in Minneapolis took a colourful form in Montreal Wednesday, where some 20 artists painted a giant "Black Lives Matter" message down a city street.

The project, which covers an entire block of the Gay Village neighbourhood, was inspired by those in other cities but has taken on a distinctive Montreal flair.

Organizer Carla Beauvais said in order to get support from the city, the group agreed to paint the phrase in French, with a smaller English translation underneath.

She said she sees the decision as a positive one, however, because it highlights the diversity of the movement fighting racism and inequality.

Following George Floyd's death in police custody in May 2020, protesters took to the streets around the world to denounce anti-Black racism and police violence. The project in Montreal an initiative of Fondation Dynastie, which celebrates the contributions Black and racialized Montrealers, and the Never Was Average artists' collective.

On Wednesday, curious onlookers stopped to take photos and chat with the paint-splattered artists, who created colourful patterns in the letters that had been laid on the street the previous day by community groups.

Beauvais said the goal of the project is to let the artists express what they're feeling.

"We usually hear a lot of activist people when we talk about Black Lives Matter, rarely do we see what the artists are feeling," she said at the site.

Awa Banmana, a 24-year-old artist and student, was filling in a large yellow letter 'M' with emblems she said reminded her of her identity as a Franco-Senegalese immigrant to Canada. That included her signature, a tribute to other artists, and images of Black women's faces.

"As an Afro-feminist, it's important to see black women represented in the public space, and not just those that are light-skinned," she said.

While she said most onlookers were supportive or curious, she said she'd run into a few critics, including some who used the "All Lives Matter" phrase that has come to be seen as an insult to the Black Lives Matter movement.

She said she wants people to know Black Lives Matter isn't uniquely about Black people. Rather, she said, it's about "a bigger critique and conversation on the system and our society," led by Black people in solidarity with other groups who face oppression including those who are Indigenous, LGBTQ+, poor or disabled.

Another artist, who give his name as Simo, chose to paint Erzulie Freda, "the voodoo goddess of love and health and beauty," in order to introduce Montrealers to a culture they might not be familiar with.

He admitted he'd been nervous about taking on such an ambitious design, but described the experience of painting on one of Montreal's most important streets as "cathartic."

"It's very empowering because I know most of these artists, and it feels like we're occupying the space," he said.

Beauvais said while the painting wasn't likely to please everyone, she hoped it would start a conversation about racism in both Canada and the United States.

While the situation in the two countries isn't the same, she said, "we're not in a competition to be the least worst."

Montreal Mayor Valerie Plante also expressed her support for the art piece, which is expected to remain until October.