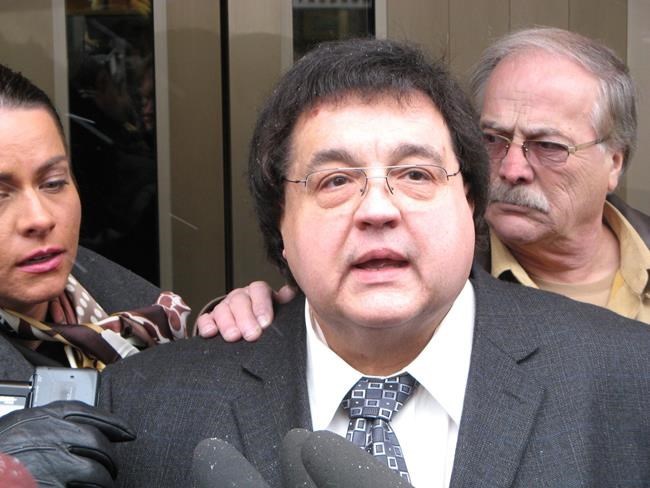 WINNIPEG — A Manitoba man who spent 23 years in prison before his first-degree murder conviction was overturned is suing the federal government, the City of Winnipeg and others for more than $16 million in damages, plus interest and legal costs.

Frank Ostrowski alleges police officers, federal Crown attorneys and others violated his right to a fair trial and engaged in a miscarriage of justice.

"The defendants' conduct ... was negligent, often intentional, and wilfully disregarded Ostrowski's rights and amounted to tortious conspiracies," Ostrowski's lawyers wrote in a statement of claim filed this week in the Manitoba Court of Queen's Bench.

Ostrowski was found guilty in 1987 of ordering the shooting of a drug dealer named Robert Nieman. The conviction was based largely on the testimony of a key witness, Matthew Lovelace, who had separate charges of cocaine possession stayed in exchange.

Ostrowski's lawyers and the jury were never told about the deal. Lovelace told the trial he did not receive any favours in exchange for his testimony.

Another piece of information from the trial proved problematic. Lovelace testified that he had told officers shortly before the killing that Ostrowski was planning to have Nieman killed. But a police officer's report about a conversation with Lovelace said he talked about a different person as the potential target.

In 2009, a Court of Queen's Bench judge cited serious concerns with the conviction and released Ostrowski on bail. Five years later, then-federal justice minister Peter MacKay ruled the case a likely miscarriage of justice and ordered the Manitoba Court of Appeal to review it.

The Court of Appeal in 2018 quashed Ostrowski's conviction, ordered a new trial and entered a judicial stay of proceedings.

Ostrowski's lawyer wanted the court to go a step further and formally acquit Ostrowski, but the panel of three judges said there was other evidence in the case and it was "not clearly more probable than not" that Ostrowski would be acquitted if a new trial were held.

Ostrowski's lawsuit says he has suffered from his time behind bars and because of the time, money and energy he has spent to fight his conviction.

"He was subjected to prison life, prison discipline, extraordinary punishments and prison diet, while knowing that it was all unjustly imposed," the document states.

"Ostrowski's sleep is affected. Often times, he now awakes dreaming and believing that he is still in prison."

The statement of claim contains allegations that have not been proven in court and the defendants have not yet filed any statements of defence.

Many of the defendants were not immediately available for comment Tuesday.

A spokesperson for the Winnipeg Police Service said via email that the agency would not comment "as this matter is before the courts". Winnipeg City Hall said it had not yet reviewed the statement of claim.

Two dead in Manitoba after RCMP believe tornado threw their vehicle into a field
Aug 8, 2020 12:26 PM