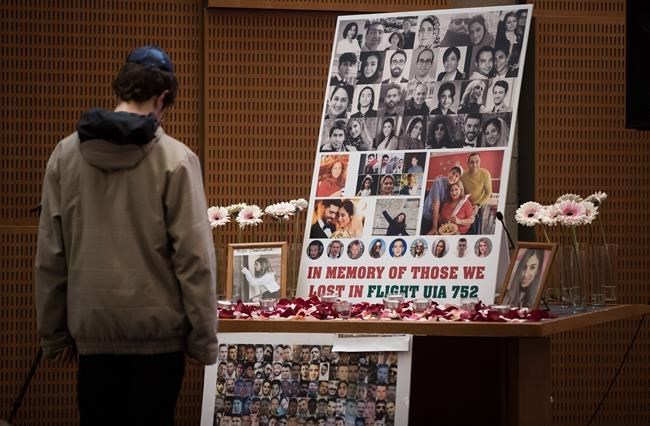 OTTAWA — Prime Minister Justin Trudeau has promised to keep fighting for answers into Iran's shooting down of a civilian airliner in January even as victims' families prepare to grill Canada's foreign minister over plans to hold the Islamic Republic to account.

Families of those killed on Ukraine International Airlines Flight PS752 expressed frustration Tuesday at the lack of progress as they launched a new group aimed at remembering their loved ones and pressing for those responsible to be brought to justice.

Fifty-five Canadian citizens and 30 permanent residents of Canada were among the 176 people killed when Flight PS752 was shot down by two Iranian missiles shortly after takeoff from Tehran on Jan. 8. Britain, Afghanistan, Ukraine and Sweden also lost citizens.

Iran initially denied responsibility before admitting its role. It has since been accused of stonewalling international efforts to find answers for how and why the plane was shot down, with victims' families accusing Tehran of trying to cover up the facts.

Speaking to reporters outside his Ottawa home, Trudeau said families are still reeling from losing their loved ones and that Flight PS752 was raised when he spoke to Ukrainian President Volodymyr Zelensky on Monday.

"We're going to continue to put pressure on the Iranian regime alongside our international partners to get answers, to get justice, to get compensation for the families," Trudeau added. "This is something we have committed to do and we will continue to do."

Yet several victims' families took aim at the federal government as they launched the Association of Families of Flight PS752 Victims, saying they want answers around what Ottawa is doing to pressure Iran into co-operating with investigators.

That includes questioning Foreign Affairs Minister Francois-Philippe Champagne when they meet him next week about the government's plan to hold Iran to account — and when.

"We need to know more," said Hamed Esmaeilion, a dentist in the Greater Toronto Area whose wife Parisa and nine-year-old daughter Reera were on the flight.

He has since emerged as a spokesman for victims' families.

"When we see Minister Champagne next week, we want to hear from him: What is the roadmap? And what is the timeframe for this? Because we can't wait forever for negotiations to end."

Esmaeilion and other members of the victims' association demanded Tuesday that Iran allow a team of international investigators comprised of countries whose citizens were on the flight so those responsible can be brought to justice.

"If Iran does not co-operate in this investigation and prosecution, it must be taken to the International Court of Justice," said Edmonton PhD student Javad Soleimani, whose wife Elnaz Nabiy was on board PS752.

Soleimani went on to warn that the Iranian government cannot be trusted — a sentiment echoed by other victims' families.

One of the key focuses in recent months has been the fate of the airliner's flight recorders, which have been recovered by Iran. Canada and others have been calling for the "black boxes" to be turned over for analysis, but Tehran has so far refused.

Canada is now pushing Iran to hand the boxes over to France. The Iranians initially promised — and then failed — to send the recorders to Ukraine by mid-March.

Last week, more than 90 days later, Iran's representative to the International Civil Aviation Organization said the country would send them directly to France — as soon as all the parties that want to be there when they are downloaded can travel.

Trudeau said Iran was blaming COVID-19 for not delivering them yet.

"The black boxes have been promised to be transferred to France but Iran is saying that they can't do it right now because of COVID," he said. "Obviously even though there's a pandemic, we're continuing to work on this issue."