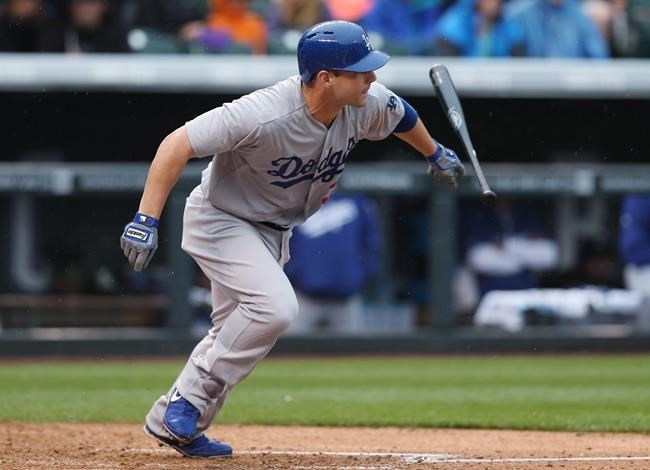 Jamie Romak had no hesitation about going back to South Korea in the midst of a global pandemic to play in his fourth season in the Korean Baseball Organization.

The first baseman from London, Ont., just didn't realize at the time that leaving Canada in mid-March would mean he'd have to be without his wife and two sons — including a newborn — for the foreseeable future.

The KBO opens its delayed season Tuesday in empty stadiums across South Korea and Romak, along with the rest of the league's players, are getting used to a new baseball normal that includes rules against high fives and spitting, daily temperature checks and the absence of fans.

But being without family is hitting Romak the hardest in the days leading up to the season opener.

"They did a great job (containing the spread of COVID-19) here in Korea so I wasn't worried about that, but we didn't know we would be in such a difficult position trying to get my family back together," Romak said in a phone interview from Incheon, where his SK Wyverns team is based.

"And that's the reality for a lot of us foreign players in this league, dealing with our family situations right now."

Romak was in Arizona training with members of his team in early March, but returned to Canada for the birth of his second child just days before the world started closing up in an effort to slow the spread of the coronavirus.

Romak secured his work visa "in the nick of time" and boarded a flight to South Korea just before airlines began halting their international trips. He and his wife had started the process of getting a passport for newborn Pierce, but the closure of government offices paused their plans.

"It's been awful, it sucks," Romak said of being separated from his young family. "With what's going on in the world right now everyone has their story and I'm fortunate that they're home and safe and healthy and I'm safe and healthy here, but it's tough being apart.

"In this lifestyle we do have stretches where we're away from one another but there's always a light at the end of the tunnel like, 'oh it's just gonna be another couple weeks.' And in this case we don't have that, it's just a big question mark."

The COVID-19 pandemic delayed the start of the Korean baseball season, which was scheduled to begin in late March. Their pre-season began April 21, giving players about two weeks of exhibition action before the new start date.

South Korea has done well in slowing the pandemic's spread within its own borders. As of Monday, there were less than 11,000 confirmed cases in the country, which has a population of 51.64 million. There have been 252 deaths and more than 9,200 recovered cases.

Regardless, safety precautions will remain in play for the KBO season.

Umpires and team officials have been wearing masks, hand sanitizer is readily available and players get their temperatures checked before they enter and leave the stadium.

New travel rules are also in place, including the exclusive use of team buses rather than allowing players to take trains on their own as they could in past seasons, Romak said. Players are also being encouraged to stay within their hotels or homes when not at the stadiums.

"The (positive COVID-19) cases have dwindled so much that at this point, (the safety precautions) almost feel like an over-precaution," Romak said. "But we have to do collectively as a league whatever we can do to keep our games going.

"At this point I think everyone is more than willing and happy to do whatever it takes if it means we get to play baseball."

Romak described playing in empty stadiums as "definitely strange" — especially in a league known for its boisterous fan base.

Scouts and team officials will be the only bodies in the stands for now, though the hope is the league can start welcoming fans back into stadiums at some point this season.

The buzz of the crowd and the general background noise have been sorely missed, Romak said.

"So much of the uniqueness about this league is the fans and how loud and energetic they are, how much noise and music and cheering is going on. And now there's nobody," he added. "So that's bizarre.

"But we're playing baseball, which is a lot further ahead of basically every other sport in the world."

Broadcast teams remain essential as games will continue to be seen live on television in both South Korea and in the United States. ESPN announced Monday it would air six games per week, one each day from Tuesday through Sunday.

Romak, the lone Canadian in the KBO this season, said it would be great to have his extended family and friends watch him play, especially at a time when sports fans are starved for live entertainment.

He said that added exposure helps slightly ease the sting of what's missing for him in Korea this year.

"There's a lot of attention on our league right now, so I'm definitely very grateful for that," Romak said. "But we talk about some of the sacrifices that we have to make, whether it's being separated from our families or sacrificing some of the comforts of what we usually have during a normal season, and the fact is we're working — forget baseball — we're working.

"A lot of people are out of work and really struggling not knowing where or when their next paycheque is coming, worrying about providing for their family. We get to not only do all that, but we get to play the game that we love.

"So yeah, we're in a very fortunate spot."