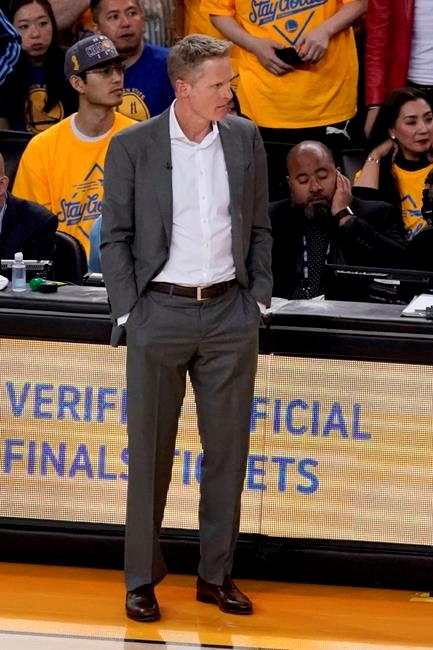 OAKLAND, Calif. — The biggest challenge of this five-year run for the Golden State Warriors has arrived.

Win three in a row, two of them on the road — or else.

It is quite the predicament, and one that they've never faced in the NBA Finals. Golden State is on the brink of being dethroned as champions, after a 105-92 loss to the Toronto Raptors on Friday night put the Warriors in a 3-1 hole in this title series.

Game 5 is Monday in Toronto, which will spend the next three days in delirious anticipation of seeing the Larry O'Brien Trophy getting hoisted on Canadian soil.

"It's not over," Warriors guard Stephen Curry said. "It's not a good feeling right now, obviously, but we have been on both sides of it. And for us it's an opportunity for us to just flip this whole series on its head, and you got to do it one game at a time. It sounds cliché — and for us that is literally the only way we're going to get back in this series — is give everything we got for 48 minutes, everybody that sets foot on that floor in Game 5."

They've been down 3-1 before, back in 2016 in the Western Conference finals against Kevin Durant and Oklahoma City. But they needed to win only once on the road to pull off that comeback.

"You just try to win one game," Warriors coach Steve Kerr said. "That's what we did a few years ago against OKC. Win one game, and then you move forward. So that's our focus now. We'll fly to Toronto (Saturday) and take a look at the film, see what we can do better and try to win a game. We have won a lot of games over the years, so we'll try to win another one."

Kerr is fond of saying that the Warriors have seen everything in these five seasons.

They have now, anyway.

They've blown a 3-1 lead — the 2016 NBA Finals against Cleveland, falling twice at home in that collapse. But the Warriors' collapse that year was due in part to Andrew Bogut getting hurt in Game 5 and Draymond Green losing his cool and earning a one-game suspension.

The Raptors have no such injury concerns, no such matters to deal with right now.

They've rallied from 3-1 down. But they're 1-5 against the Raptors this season, and now need to win three in a row against a team that has had all the answers against them.

"We haven't done anything yet," Raptors guard Kyle Lowry said.

The Raptors are as poised as can be.

They were in trouble in each of the first three rounds of these playoffs — down 1-0 to Orlando, down 2-1 to Philadelphia, down 2-0 to Milwaukee. It steeled them. Toronto got better every step of the way.

Golden State looked the exact opposite on Friday night. The Warriors are still without Kevin Durant, endured a night where Curry struggled, and where their biggest boosts came from Thompson returning from a balky hamstring and Kevon Looney playing through the pain of a cartilage injury in his upper body.

The Warriors made a run. Curry's 3-pointer with 3 minutes left pulled Golden State within eight and gave the Warriors a chance. They scored three points the rest of the way.

They may have walked off the court at Oracle Arena for the last time, with the team moving across the bay to San Francisco and the brand-new Chase Center next season. They know the stakes, they know that the roster may change in some big ways this summer and nobody knows if Durant will be ready for Game 5.

Kerr said he doesn't think of this as daunting.

"We go to Toronto, and this is what we do for a living, we play basketball," Kerr said. "So we look forward to playing another basketball game in an exciting atmosphere, and the ultimate test."