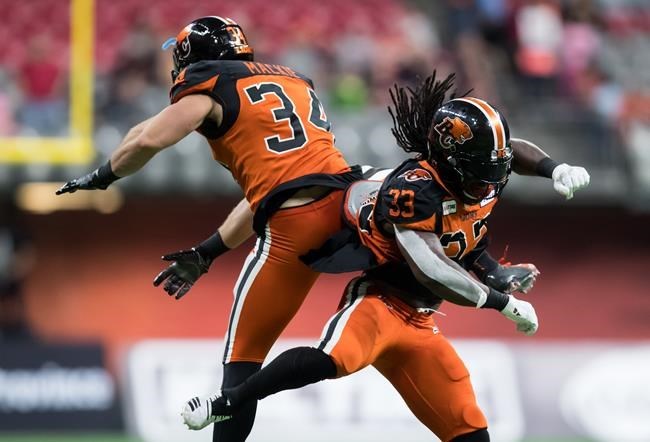 VANCOUVER — Less than two weeks after signing his first CFL contract, quarterback Grant Kraemer stepped into the starring role Friday night to help the B.C. Lions to a 38-36 comeback win over the Calgary Stampeders in the final pre-season game for both teams.

The 23-year-old native of Northridge, Cali., came off the bench in the fourth quarter to throw for 145 yards and a touchdown. He also added a TD of his own with a one-yard rush.

It was a performance that impressed Lions coach DeVone Claybrooks, who has until 10 p.m. ET on Saturday to make his final roster cuts for Week 1 of the CFL regular season.

"He's got some moxie. To come in an adverse situation, there wasn't any panic in his voice, he went through his reads," Claybrooks said. "Kudos to the kid for performing in a pressure situation and showing up."

The Drake University alumni knew from the beginning that he had to put in extra work to make a mark. Unfamiliar with the Canadian game, he devoured YouTube highlights and studied every page of the Lions' play book.

That work paid off on Friday night when the rookie quarterback made a series of tough plays in the game's final minutes.

"I think it was just the preparation, studying my butt off every single night, every single play so when I got in the game, I knew what plays were going to be coming and I knew where to go with the football," Kraemer said.

B.C. was down 14 points and offensively flat at the end of the third frame before Kraemer subbed in for Austin Apodaca, who had 115 passing yards and an interception.

Lions fans got their first look at the team's new star pivot Mike Reilly, who tossed for 110 yards in the first, completing 8-of-11 passes and sneaking across the goal line for a touchdown.

Calgary's veteran quarterback Bo Levi Mitchell threw for 84 yards and a touchdown, completing 4-of-6 passes in the first quarter.

He was replaced by Nick Arbuckle in the second frame. He added 87 passing yards, two touchdowns and an interception before Montell Cozart closed out the game by throwing for 106 yards.

The Stamps also got a TD from rookie defensive back Marco Myers, who intercepted a pass from Apodaca and streaked 65-yards down the sideline into the end zone.

Calgary coach Dave Dickenson said he's intrigued by the young athlete, but noted he missed some plays as well.

"I like his attitude. I know he's physical and he wants to be here. We need to grade the film on that," he said.

Several young players made mistakes on Friday night, the coach added, saying he saw some guys panic late in the game.

"You could probably tell there was a lot of young players. We let a lot of double moves and plays down the field. A lot of it is because we weren't getting pressure on the quarterback," Dickenson said.

Now he wants to find out how his players react to real pressure.

"Who gets tight? Who enjoys the big moments? And I thought certainly our youngsters got tight late in the game."

B.C. also fielded a number of untested athletes on Friday night, part of a roster that underwent a radical overhaul during the off-season.

The team signed Reilly to a four-year, $2.9-million deal, added a number of key veterans from around the league and installed Claybrooks at the helm.

The new-look squad started off strong on Friday, trading scoring opportunities with the Stamps across the first quarter.

But when stars like Reilly and receivers Duron Carter and Bryan Burnham were replaced with younger players looking to cement their place on this year's roster in the second quarter, the offence faltered.

The Lions struggled to penetrate the Stamps defence through the third and second frames, putting away a single field goal across the two quarters.

Kraemer and running back Wayne Moore added three touchdowns in the fourth to help dig the Lions out of the hole.

The finish bodes well for the season ahead, said Burnham, one of B.C.'s few returning veterans.

"We just found out what it takes to win early on in the season," he said. "That's a plus for us. That's a good lesson for these guys to learn, how to overcome adversity."

The Lions will kickoff their regular season on June 15 when they host the Winnipeg Blue Bombers.

Calgary will see a Grey Cup rematch the same night, when the Stampeders battle the Ottawa Redblacks.

NOTES: Both B.C. and Calgary split their pre-season contests. The Lions previously dropped a 22-7 decision to the Edmonton Eskimos, and the Stamps trounced the Saskatchewan Roughriders 37-1. ... Rookie Reese Flemming led Calgary's back end with six defensive tackles while fellow first-year Nick Statz put up four.