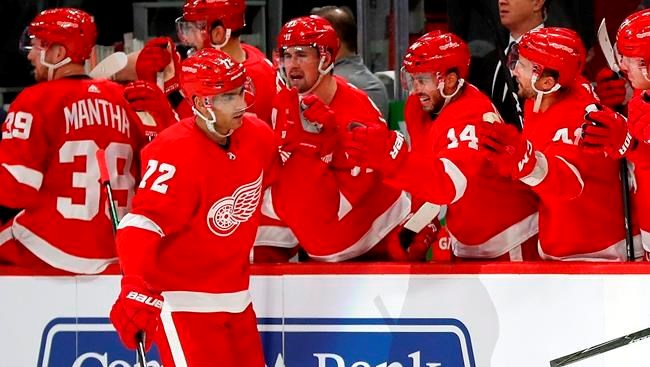 DETROIT — The Detroit Red Wings can only wish they played Montreal more than just four times this season.

“Feels good to beat them four times," Red Wings Dylan Larkin said. “They’ve got a good goalie, a good team. That’s a team that the last couple of years beat us pretty bad.”

Detroit has earned four of its NHL-low 15 victories against the Canadiens.

“I think they wanted to win the game more than we did, so they made plays when we didn't," Canadiens forward Paul Byron said. “They fought and made some big plays."

Red Wings goaltender Jonathan Bernier did not give up a goal in the third period and finished with 19 saves.

Nate Thompson and Jeff Petry scored to give Montreal a 2-0 lead in the first period and Nick Suzuki's goal put it ahead 3-1 after two periods.

Detroit's Robby Fabbri had a goal in the first period and teammate Mike Green scored a game-tying goal midway through the third period for his 500th career point. The veteran scored on a shot that fluttered past Price.

“With Carey, he probably knew where I was going," Green said. “Good thing I flubbed it. I’ll take it.”

Athanasiou scored his first goal early in the third and followed up later in the period with the winner, giving him 10 goals in 45 games. The performance perhaps increased his trade value for a rebuilding team that may deal the speedy, 25-year-old forward for draft picks or prospects by Monday's deadline.

Carey Price had 21 saves for the Canadiens, who have lost five straight for the third time this season.

Montreal had chances to avoid getting swept by a team that has by far been the league's worst this season and failed.

“We all knew we haven't played well against them and we know we blew a lead here the last time," said Montreal's Shea Weber, who returned to play after missing six games with an ankle injury.

The Canadiens failed to take advantage of a power play late in the third period and their comeback chances took a hit when Joel Armia was called for roughing with 2:44 left. Price was pulled to add an extra skater after the penalty was killed, but the Canadiens could not pull into a tie to send the game to overtime.

“I can't put my skates on and play for them," Canadiens coach Claude Julien said. “We need them to play 60 minutes."

Red Wings President and CEO Chris Ilitch was at a news conference, announcing an initiative to give children in Detroit more access to hockey, and provided his take on the team's woes under first-year general manager Steve Yzerman. “Rebuilds are tough, right? Nobody likes to lose," Ilitch said. “I don’t like to lose. Our fans don’t like to lose. Our players don’t want to lose. But, I think that what we are looking at and measuring is progress, and I think Steve has settled in incredibly well. ... I believe we'll get there. It's just going to take time." ... Petry had at least one fan in the stands, his father, Dan, who helped the Detroit Tigers win the 1984 World Series as a right-handed pitcher.