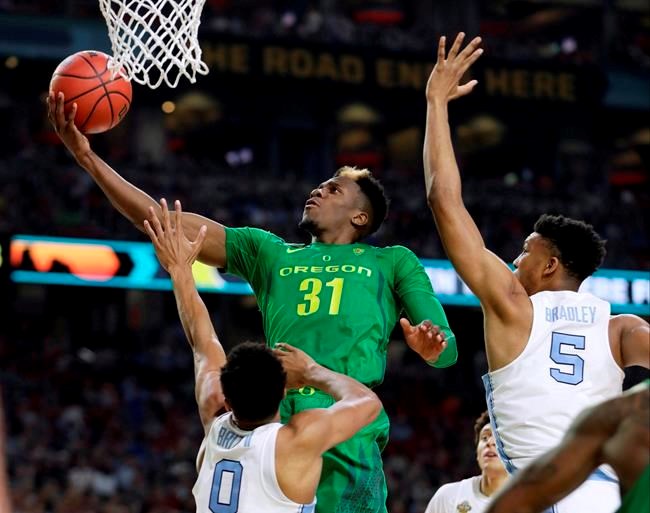 Dylan Ennis posted a video on social media on Sunday of his young daughter Amiyah, toddling at full speed toward the camera, giggling with delight.

In Spain, where Ennis lives with his wife Megan and their daughter who recently turned one, it was the first time in nearly two months that children were permitted to play outdoors as the country began to methodically ease the lockdown from COVID-19.

"Oh, my gosh, it was everything," said Ennis, a basketball player from Brampton, Ont. "Our daughter loves being outside. She just started walking so she loves to run everywhere. It just helps being outside our four walls."

When the coronavirus shut down sports around the world a few weeks ago, dozens of Canada basketball players plotted their long trips home from abroad. Jamie Scott, who played in the Russian women's league for Dynamo Novosibirsk, finally returned home this week.

Ennis and Kevin Pangos, who both play in Liga ACB, Europe's top league, opted to stay and weather the storm in Spain, which has seen almost 25,000 deaths due to coronavirus.

Lockdown in Spain has been serious business. Until Sunday, residents were only permitted outside to go to a grocery store or pharmacy.

Pangos, a point guard from Holland Landing, Ont., lives in Barcelona, where silence descended like a heavy curtain when the country locked down.

"All you could hear was the wind. We live in the city centre, so that's really unusual," said Pangos, who plays for 18-time Spanish League winner FC Barcelona. "The occasional bus might go by. But it was really, really eerie.

"They really weren't messing around, taking any chances. And everyone followed (the rules). When I would go to the grocery store it was like a ghost town, I felt like I was in a movie where it like a deserted city, because I didn't really see anybody out in the streets. It's crazy that we're going through this right now."

Some non-essential workers were allowed back on the job last week as gradual lifting of lockdown restrictions began.

As part of this phase of re-opening, people are permitted to walk outside for an hour a day, but only one adult per family at a time, and they must remain within a kilometre of the house or risk "hefty fines," Pangos said. His wife Kate takes their daughter Olivia for a walk. Pangos goes out separately with their dog.

"Every time I see videos (from Canada), I get jealous," he said. "Like you're out running and doing activities it's like man, that'd be nice."

The 28-year-old Ennis was having a career season with Basket Zaragoza, which was third in the ACB when play was suspended. Barcelona was leading the league, but Pangos hadn't played a regular-season game since suffering a foot injury and was itching to finally get back on the floor.

"It is a really, really interesting year for me, I was getting really close to coming back and then this happened," said Pangos, who played for Canada at the World Cup in China last summer. "So it kind of sucks for me. I'm hoping we still finish the season. I'm hoping they find a way to, we'll see, it's going to be difficult.

There is a silver lining for Pangos.

"It did give me the extra time. . . just to heal up and stuff. So yeah, gotta look at the positives, right?"

Ennis said teams might allow individual workouts in the next couple of weeks, and then maybe "team stuff in the next two or three weeks.

"But personally, I think it's going be tough to start because the country wants to be cautious . . . I don't think the country is going to get the go ahead to allow us to start up in a week or two, but the league's pushing it. If we started, obviously I love playing basketball but I think safety's first."

Players would also undergo "a million and one tests," he added. "And if one person has the virus in competition, they're just gonna cancel."

Meanwhile, Ennis and his wife are filling their free time watching Netflix — they recently finished "Little Fires Everywhere," and loved "Tiger King" — and walking Amiyah up and down the hallway of their apartment building.

"Luckily, our daughter's a little crazy and entertaining, she keeps us entertained," he said. "And I try to work out every day, whether that's on the bike, upper body, lower body lift."

Pangos said he misses the freedom of being able to go for a run or go to the gym.

"And then the social aspect too . . . our only other interactions are over the phone, we don't get any of the social interactions of going to restaurants or being with friends and family," he said. "So that's been difficult too. But there's a lot of people are in that same situation, so it's just how it is."

Scott arrived in Los Angeles on Thursday, a couple of weeks after her team in Novosibirsk, the Siberian city that's a three-hour flight from Moscow, said she was free to go, and had assured her she would receive her full salary. Canadian teammates Ruth Hamblin and Miah-Marie Langlois had flown home a month earlier.

"I (stayed) because I thought I get paid and I still get a workout, and the lockdown isn't that bad here, I have a free apartment," Scott said. "I was like let me just do this for one month and collect my full salary."

The tough part was finding a flight home. Initially she'd heard there would be none until late May, but she and her mom checked flight schedules daily, and earlier this week a flight was added.

"So luckily I had all my stuff basically packed," said Scott, who was on the flight home two days later.

With the end of the Russian league cancelled outright, Scott and her husband Larry — they met while at Oregon State where he played football — are unsure of their next move. Scott would have spent this summer with Canada's women's team preparing for the Tokyo Olympics.

"This might be the first full summer I have had off in . . . I've never had that before," said Scott. "So we're just kind of trying to plan like our next move, see our families. There's so much up in the air. I'm just trying to stay in the best shape possible, take one day at a time and keep moving forward."