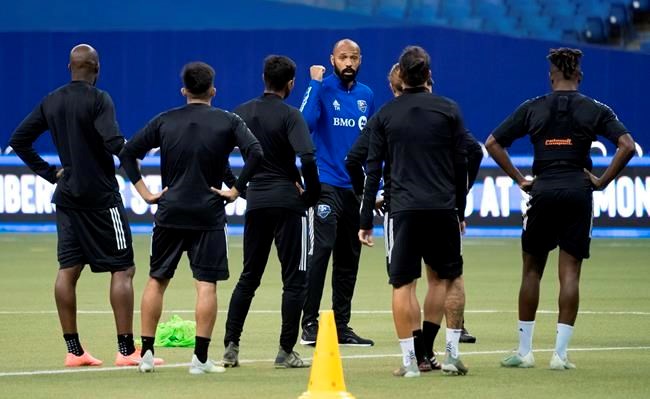 MONTREAL — "Mr. Gram" has been a big help to Montreal Impact manager Thierry Henry these past few weeks.

The former Arsenal great joked that "Gram" (first name "Insta") has been his go-to for figuring out any new developments with Major League Soccer's plans to resume play in Florida during the COVID-19 pandemic that has resulted in over 150,000 confirmed positive cases in the state.

"That's where I get my news," Henry said.

There has been no avoiding talk of the coronavirus in the daily news cycle, and it has even affected Henry's personal life. The manager told media in a videoconference Tuesday that some members of his family, as well as friends, have had the virus. They have since recovered.

"It was, and it still is, a weird situation that we need to adapt (to)," Henry said. "It will never be the same after COVID-19. As long as the vaccine is not there, we're going to have to respect distances and wear a mask. Being on the field with a mask and try to (coach) a session isn't the easiest thing."

As for how the virus could affect matters on the field at the MLS Is Back Tournament, set to take place July 8-Aug. 11 near Orlando, the manager says he will prepare his team for any challenge that could come their way — even if there may be some unknowns with the virus.

Henry also weighed in on the Black Lives Matter movement and anti-racism protests that have risen since the death of George Floyd May 25 in Minnesota. Earlier this month, Henry released a statement demanding change and calling Floyd's death "tragic and unnecessary."

Henry says he'd like to show his support to the movement in some way while in Orlando, but declined to expand further. He also said he is unaware of what the league will let him and his team do.

"I think that we all know that Black Lives Matter," Henry said. "We've been talking about it. Everyone is doing it, everyone is showing that they're starting to understand our pain."

The Impact will travel to Florida on Thursday in advance of the 26-team tournament, which will begin with each team playing three group play matches. Montreal is in Group C alongside New England, D.C. United, and Toronto FC, which means the tournament will serve as Henry's first taste of the Montreal-Toronto rivalry even if it will lack spectators.

"It is an important game and, trust me, everybody is letting me know how special it is."

Montreal opens the tournament versus New England on July 9 before playing Toronto FC on July 15 and D.C. United on July 21.

This report by The Canadian Press was first published June 30, 2020.