UFC fighter Anthony Smith takes a beating, loses tooth and then hands it to ref 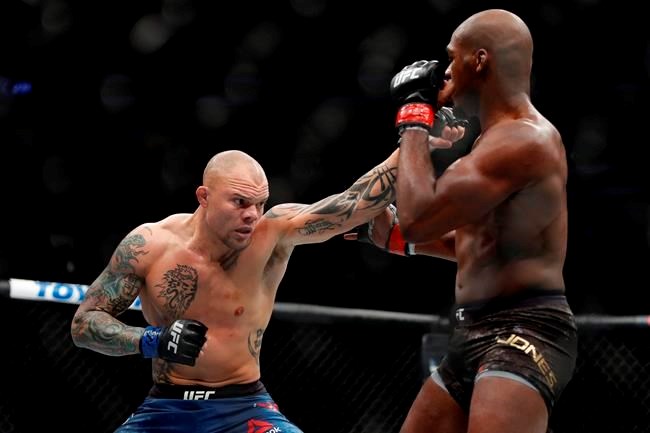 JACKSONVILLE, Fla. — UFC light-heavyweight contender Anthony (Lionheart) Smith lived up to his nickname Wednesday, taking a beating that included him handing one of his teeth to the referee mid-fight.

"My teeth are falling out," a battered Smith told his corner after the fourth round.

Glover Teixeira, ranked No. 8 among 205-pound contenders, stopped No. 4 Smith in the fifth round in a brutal fight that saw a candid exchange caught by the microphone in the empty VyStar Veterans Memorial Arena after a bloodied Smith offered the tooth to referee Jason Herzog.

Teixeira, on top and punching Smith at the time, said: "Sorry, Anthony, it’s part of the job."

The fight was finally stopped at 1:04 of the fifth round with Teixeira on top of Smith, dishing out punishment.

Smith was taken to hospital. Teixeira, who said later he thought he had broken his right hand in the bout, won a performance of the night bonus.

ESPN reported that in addition to losing two teeth, Smith suffered a broken nose, broken orbital bone and a cut under his right eye.

The heavy-handed Teixeira held a 138-86 edge in significant strikes throughout the fight, according to UFC Stats.

"Us sitting on the outside, it was a little tough to watch," UFC president Dana White said after the fight.

Teixeira hurt Smith early in the fourth round with a huge uppercut. And he absorbed more punishment. About 90 seconds into the round, with Smith on his knees and Teixeira on top trying to secure a choke, Smith handed the tooth to Herzog.

White was watching on a monitor ringside.

Many thought the fight should have been stopped earlier.

"I'm no doctor but I'll be shocked if he doesn't have a broken orbital. Because every time he got punched, he reacted."

White said Herzog could have stopped the fight in the fourth round.

Smith said he had no problem with either the referee or his corner.

"When the ref made it clear he needed to see something or he was going to stop it, I did what I had to do to stay in the fight," he told ESPN. "I come out of battle with my shield or I come out on it. That's my rule. Period."

"Sometimes you've got to save the fighter ... This didn't need to happen like this to Anthony Smith."

The 40-year-old Teixeira walked out in to "Welcome to the Jungle" by Guns N' Roses. Smith followed to the strains of Mark Morrison's "Return of the Mack."

The tide changed as the fight wore on.

Teixeira took some damage around the left eye but rallied to punish Smith at the fence. Teixeira hurt Smith with uppercuts in the third round and dropped him with a left at the fence.

With Smith on the ground, Teixeira fired shots from above as the round ended. Smith's ear was bleeding from the barrage of blows.

Teixeira hammered Smith to open the fourth. A bloody Smith took punishment on the ground.