The honey bees are back and enjoying the blossoms on our backyard apple tree. And whataperfect excuse to reconnect with our bee-friendly coffee companion, Stella Constance.
0
Jun 6, 2019 8:24 AM By: Warren Harbeck 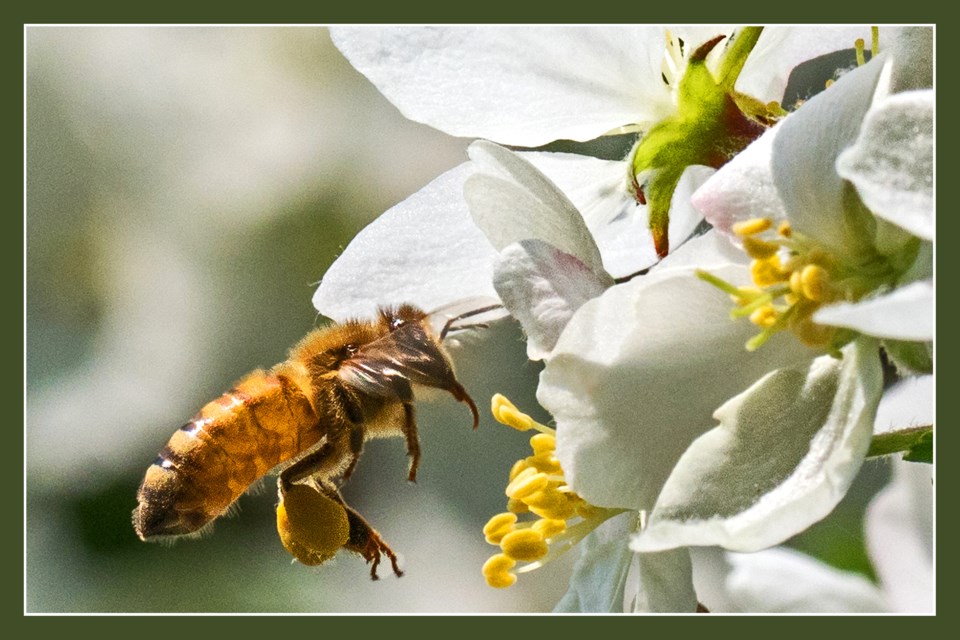 The honey bees are back and enjoying the blossoms on our backyard apple tree. And what a perfect excuse to reconnect with our bee-friendly coffee companion, Stella Constance.

Stella is a Calgary-based community educator who spoke of wisdom she’d learned from bees in our column for May 12, 2016.

This week, at my request, she’s confessing her delight as an urban beekeeper in getting up real close and friendly with her buzzin’ buddies. But she concludes with a heartfelt concern for their wellbeing shared by many of our readers. Stella writes:

MY TALE OF URBAN BEEKEEPING is a cautionary one. Upon my introduction to my New Zealand honey bee colony, and later to the Italian-Canadian honey bee colony, after the imported colonies had settled into their new hives / locations, I would say that the first 20 minutes was very important as a beekeeper in forming a bond with them. They pick up on people’s energies. If people are anxious, they pick up on that negative energy that often leads to defensive behaviours on their part.

Luckily, I was able to quickly reclaim my calmness, even when a contingent of them landed on me in a wave. Quite a few guards were watching me carefully, with their stingers drawn. The moment I changed my energy to that of peace and calm, the guards retracted their stingers and flew back to their posts, and the other honey bees that came to assist also retracted their stingers then proceeded communicating with each other, cleaning each other, and other social bonding activities, while still being on me.

At that moment, I became “Stella the Communal Perch” for the hive, when I would sit by their entrance to observe their activities. However, when I would wear a white suit and do a hive inspection, for them that was a “home invasion,” and they did not take to that well, associating the white suit with a hive threat. They wanted to kill me.

But after the hive inspection was done, and they were left alone for about 20 minutes, I was able to approach them in my tank top, shorts and sandals, and sit by them again – no problem.

The effect the 7,000 bees(later becoming 14,000) had on my community was phenomenal. Life was returning to the community. Fruit bushes, trees and flowers were visibly thriving from spring to summer to fall. The energy in the community also changed. More people were more positive and doing more walks in the community with friends and family members.

Nevertheless, people’s priorities continue to include having the perfect lawn. With the early spring and late fall seasons, the honey bees are heavily reliant on what was once considered a precious medicinal herb and edible, the dandelion, now categorized as a weed. Bees are being starved and poisoned from existence.

I witnessed this firsthand in a community of “perfect lawns” that eventually wiped out my hives. When a bee lands on a fresh application of toxic herbicide, they bring back the toxic chemical residue to the hive and spread it around, which harms the immune and nervous systems of the bees, and the general health of the hive.

Until people’s priorities change, another hive will not be put into a toxified community to watch them get injured and die a preventable death. They are good, godly animals – they are to be respected as an essential living element to the good health of all terra ecosystems.