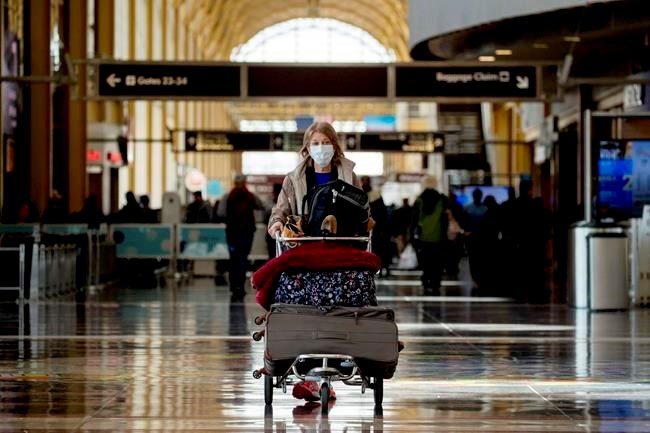 The United States implemented dramatic new restrictions on Americans going out in public and 7 million people in the San Francisco area were put on a near-total lockdown to control the coronavirus emergency that has walloped the global economy.

Not everyone was adhering to the clampdowns, however.

On the same day that the Trump administration called on Americans to not gather in groups of more than 10 people and urged older people to stay home, Arizona, Florida and Illinois went ahead with plans to hold presidential primaries Tuesday. Ohio called off its primary just hours before polls were to open.

Beaches on Florida’s Gulf coast near Tampa stayed open, including one that was was flooded with spring breakers. Gov. Ron Desantis said he would leave it up to communities whether to restrict access to beaches.

"It's not probably advisable to have spring break gatherings" but that people in small groups at the beach is probably OK, he said. “I think the communities can work that out."

Texas Gov. Greg Abbott, a Republican, praised the federal government's response as he took only limited action amid the outbreak. Unlike other governors of heavily populated states, Abbott has not made explicit calls for limiting mass gatherings.

The comments came on the same day that the number of infections in the U.S. climbed to nearly 4,500, with at least 81 deaths, two-thirds of them in hard-hit Washington state. Worldwide, more than 7,100 have died.

With the U.S. economy shuddering to a near-halt, the Dow Jones Industrial Average plummeted nearly 3,000 points, or 13%, its biggest one-day percentage loss since the Black Monday crash of 1987.

The rapid work stoppage had Americans fretting about their jobs and their savings, threatened to overwhelm unemployment benefit programs, and heightened fears the country could plunge into a recession.

The decision to move ahead with primaries ran counter to stern new guidelines put in place by the Trump administration.

Over the next half month, Americans should not gather in groups of more than 10 people, schooling should be at home and discretionary travel and social visits should be avoided.

The president for the first time acknowledged that the pandemic may send the economy into a recession and suggested that the nation may be dealing with the virus until “July or August.”

Elections officials in Arizona, Florida and Illinois said they were taking precautions to make sure voters could safely cast their ballots, despite widening calls for people to avoid going in public. A handful of other states already postponed their elections.

Growing public unease over the coronavirus spread was causing disruptions to polling places in some states before they even opened.

In Pasco County, Florida, the number of poll workers dropping out surged from 20 last week to more than 150 by Monday after a case of coronavirus was confirmed in the county.

“It’s a skeleton crew at a lot of locations,” said Okaloosa County Supervisor of Elections Paul Lux. “We are at the honest end of the rope in terms of who I can grab and who I can get trained and get deployed.”

In Illinois, counties were moving polling places out of nursing homes, offering ballot drop-off options for jittery voters and scrambling to find replacements for poll workers at the last minute.

And the city elections commission was begging healthy people to volunteer to work at the polls amid a "tsumani" of cancellations.

Meanwhile, millions of Americans were holed up at home, with many thrown out of work until further notice as the list of businesses forced to close across the U.S. extended to restaurants, bars, gyms and casinos.

Officials in six San Francisco Bay Area counties issued a “shelter in place” order affecting nearly 7 million people, requiring most residents to stay inside and venture out only for food, medicine or exercise for three weeks — the most drastic measure taken yet in the U.S. to curb the spread of the virus.

"I know today’s order is a radical step. It has to be. We need to act now, all of us," said Dr. Grant Colfax, director of the San Francisco Health Department.

Health officials, politicians and business leaders are talking about "social distancing" and "flattening the curve," or encouraging people to avoid others to slow the spread of the virus and keep U.S. hospitals from being overwhelmed with a sudden deluge of patients.

Most people who come down with the disease have relatively mild symptoms, but it can be deadly for some, especially the elderly and those with underlying health problems. Most people infected with the virus recover in a matter of weeks.

The shutdowns touched every corner of the country: blackjack dealers in Las Vegas, theme park workers in Orlando, Florida, restaurant and bar employees nationwide, and winery workers in California. At least eight states called on all bars and restaurants to close at least part of the day.

The economy appears to be decelerating at a much faster pace than during the 2008 financial meltdown.

“This is like an avalanche. It's all happening at once,” said Heidi Shierholz, senior economist at the Economic Policy Institute. "And no one knows how long it's going to last.”

On the other side of the ledger, Amazon announced it wants to add 100,000 workers to deliver packages amid a surge in online orders from people unable or unwilling to set foot in stores. And gun sales soared in many places as fear took hold.

“I’ve never seen it like this," said Ed Turner, who owns Ed’s Public Safety in Stockbridge, Georgia. “This is self-preservation. This is panic. This is ‘I won’t be able to protect my family from the hordes and the walking dead.'”

With schools closed for tens of millions of children across the country, parents began using lesson plans that included flash cards, online learning, dog walks and creativity sessions. Many did this while juggling work conference calls, emails and memos. Others scrambled to find child care.

Nationwide, many restaurants were restricted to takeout or delivery only.

Election emerges as referendum on race relations in America
Oct 30, 2020 9:37 AM