Okotoks Curling Academy grooming a lifelong love of the game 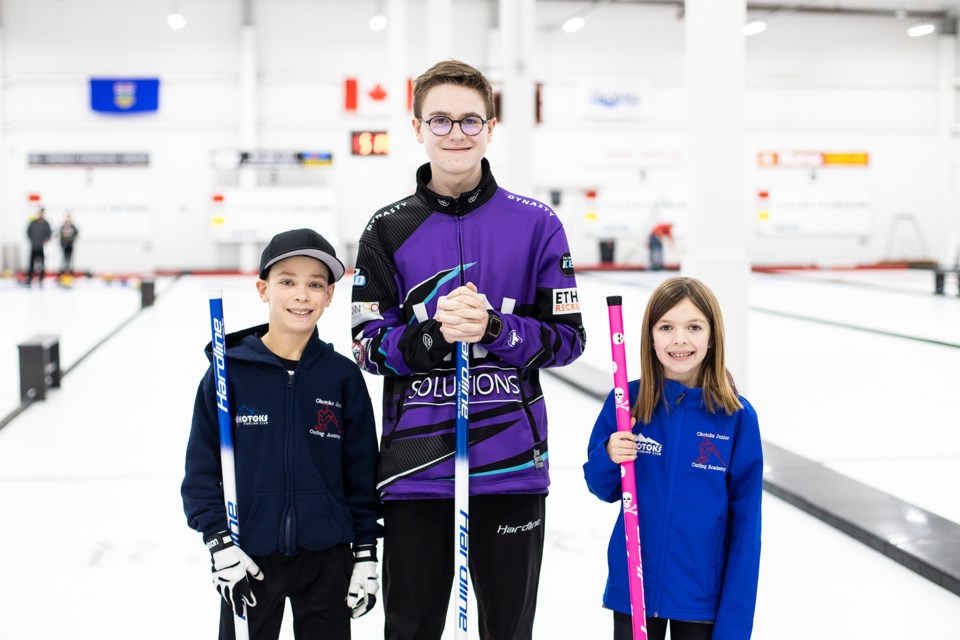 Left to right, Kesler Bachek, Logan Thomas and Taylor Hay from the Okotoks Junior Curling Academy pose for a photo at the Okotoks Curling Club on Dec. 19. (BRENT CALVER/Western Wheel)

Curling, like few other sports, can be a lifelong pursuit.

And for those dipping their toes into the sport, the Okotoks Junior Curling Academy is there to cultivate a love for the roaring game that can last a lifetime.

“This is really the second year that some of our junior curlers have also been curling in our adult leagues,” said Tenielle Bachek, Okotoks Curling Club Junior co-ordinator. “Which is really nice to see the club drawing them into their community. It’s awesome to see some of the 10 and 11 year olds curling with some of the lifetime members.

“That’s what we really try to instill in the kids, a lifelong learning of the game, you really can curl for so long.”

New this year is the competitive academy on Tuesday nights under the lead of coaches Mike Libbus and Atina Ford Johnston.

“That’s because we’re a training centre for Southern Alberta Curling so we have a lot of technology in our rink we didn’t have before,” Bachek said. “Cameras, lasers, because they’re training out of here for some of the more elite teams we can use it for our competitive program.”

Logan Thomas, the lead for Team Kiist out of the academy, has certainly noticed a difference since the competitive program launched.

“I started out on the Monday night programs and have progressively got more competitive,” said Thomas, a nine-year member of the academy. “It’s honestly amazing. It’s more serious, they focus a lot more on your technical skills and focus a lot on teamwork and communication.”

The Monday program features those in the U12 groupings, many of whom are new to the game.

“I didn’t like figure skating very much and my mom wanted to get me onto ice for a sport and I decided I wanted to do curling,” said Taylor Hay, in her second year with the academy. “It took a month to get used to, but then I started to really like it.”

Ten-year-old Kesler Bachek is part of the Thursday group.

He found his way into the game by taking advantage of a vacancy on game nights at the club.

“This one night there just happened to be an open sheet here and I was watching a league game that my mom or my dad were playing,” said Bachek, who recently won the club’s hit-draw-tap contest. “My mom or my dad asked the guy running it if we could go out. We just starting throwing rocks from the backboard and over time we got me sliding.

“I really liked it, I like throwing rocks and now I like it because it’s kind of a team thing.”

The weekly Monday sessions also draw on the talent of the junior helpers, young curlers — like Thomas — who tackle coaching their younger counterparts.

“I didn’t really know what to do at the start of the season,” Thomas said. “But I observed how other coaches did it and I adapted how I was coached and how they were currently coaching to my coaching style.”

Fortunately for Thomas, he’s got a pretty good role model to follow after coming up through the academy through former coach and accomplished curler Taylor Ardiel.

“He was huge for me, even today I still look up to him,” Thomas said. “Honestly, just to be a good person and be willing to help out wherever you can.”

One of the side effects of coaching is it gives current athletes insight into their own game and Thomas is no exception.

“For me I’ve been able to observe exactly how to kick out of the hack straight,” he said. “I’ve struggled with my consistency with doing that for a few years and I’m finally working towards achieving that.”

Thomas and his team have enjoyed a strong season, highlighted by qualifying for the 2020 Alberta Winter Games — held in Airdrie in February.

Closer to home, with the 2020 Alberta Scotties Tournament of Hearts in Okotoks just weeks away, the excitement around the club is palpable.

“Some of them are really excited because they’ve experienced some competitive curling before,” Bachek said. “The kids really like bringing in the team signs, they were fortunate enough that we could do that last year for the Junior provincials that we hosted.”

The curling academy is also hoping to connect with the community on a broader scale in the days leading up to the Alberta Scotties.

“We’re doing a colouring contest through the library, some of the schools are doing some rocks and rinks programs,” Bachek said. “The ones that are here (at the club) are certainly excited and we’re trying to reach more into the community as well.”

The academy is one of only a handful this year piloting a Curling Canada skills program this year.