EDMONTON — Alberta has passed legislation that will give all workers three hours of paid, job-protected leave to get a COVID-19 vaccination. Labour Minister Jason Copping says Bill 71 will reduce barriers for Alberta workers to get vaccinated.
Apr 22, 2021 10:15 AM By: Canadian Press 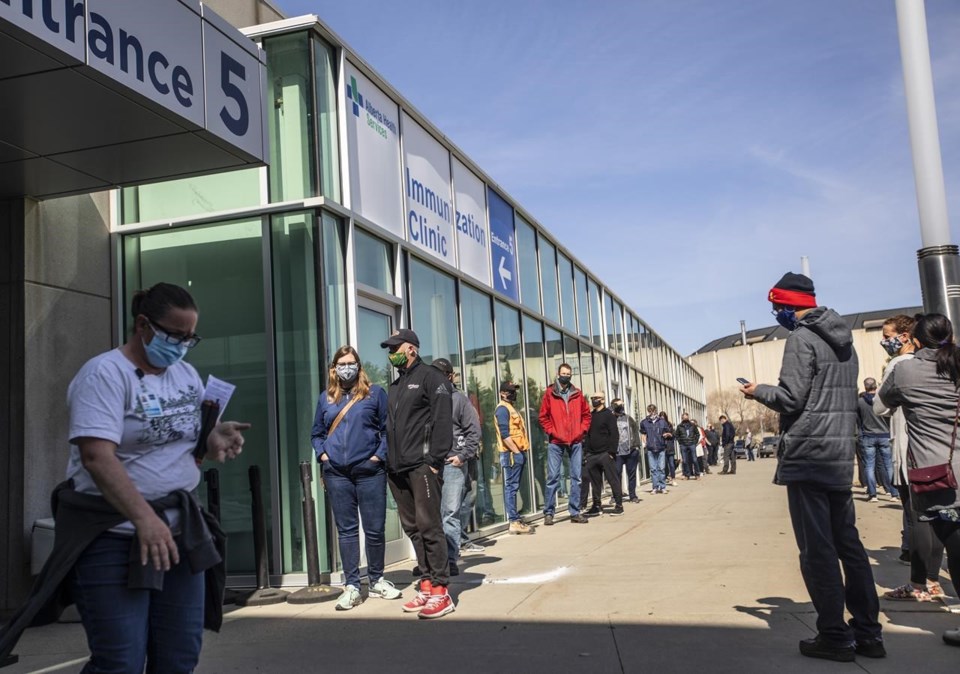 People line up outside an immunization clinic to get their Oxford-AstraZeneca COVID-19 vaccine in Edmonton, Tuesday, April 20, 2021. THE CANADIAN PRESS/Jason Franson

EDMONTON — Alberta has passed legislation that will give all workers three hours of paid, job-protected leave to get a COVID-19 vaccination.

He says the change which goes into effect immediately means no one will have to choose between getting vaccinated and putting food on the table.

The amendment to the Employment Standards Code applies to all employees regardless of their job status or length of employment.

The legislation was passed quickly Wednesday only hours after health officials reported 1,699 new COVID-19 cases in the province and a test positivity rate of 9.5 per cent.

Health officials confirmed another 1,332 variant cases and said variants now make up about 59 per cent of Alberta's 18,873 active cases.

"Effective today, every working Albertan can access up to three hours of paid, job-protected leave for each dose of the COVID-19 vaccine," Copping said in a release.

"This is the right thing to do and we will continue to take bold actions to protect Albertans lives and livelihoods while ensuring our economic recovery."

The NDP said the legislation was first proposed by Opposition leader Rachel Notley on Tuesday.

"We need to do everything we can to get Albertans vaccinated," Notley said in a release. "This is our best weapon against COVID-19 and the best way to keep workers and the people they interact with safe."

Alberta has the highest per-capita case count in Canada.

Notley noted that British Columbia introduced similar legislation earlier this week and Saskatchewan adopted measures to allow for paid leave to get the vaccine in March.

This report by The Canadian Press was first published April 21, 2021