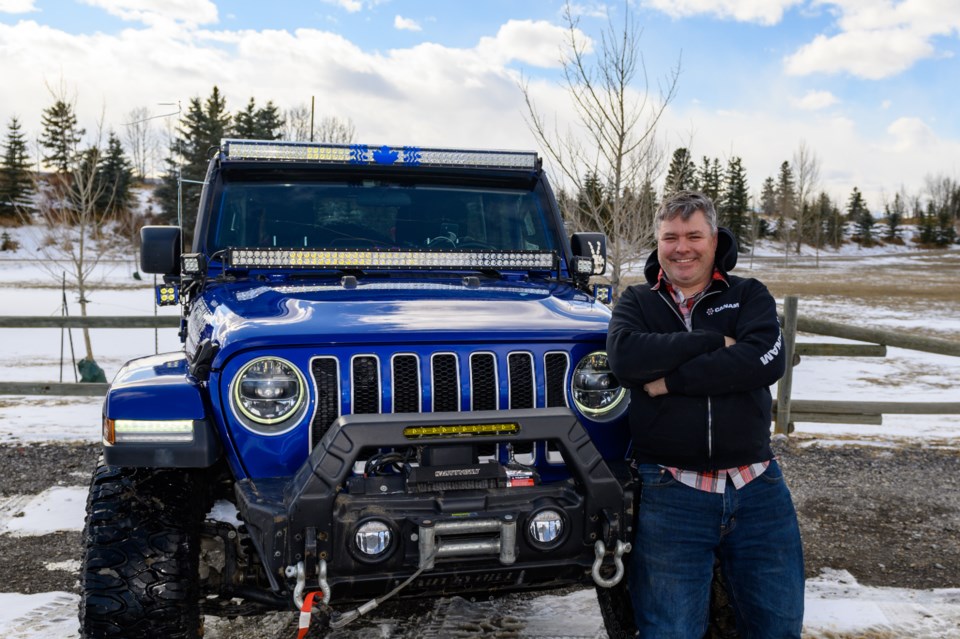 President of the Cochrane Jeepers, Christopher Richter, poses beside his Jeep in Cochrane on Monday (March 29). (Photo by Jack Carter/The Cochrane Eagle)

COCHRANE— Starting Tuesday (April 6), the Cochrane Jeepers will be commencing their birthday parades again for this year.

Born out of the stress and uncertainty of COVID-19, the Cochrane Jeepers have been delivering smiles to those who are missing their birthday celebration all over town with colourful Jeep parades during the pandemic.

“It's kind of funny because it actually was right around this time last year. The pandemic started and our 10-year-old's birthday got cancelled,” said nominated president of the Cochrane Jeepers, Christopher Richter. “Everyone was unhappy.”

It was not until Richter and his wife organized a birthday parade for their neighbours, that the requests for other parades started flowing in.

“On that day, we got seven or eight requests for more Jeep parades. It was kind of like, What the heck's going on?”

Since then, Richter and his group of now almost 300 Jeep enthusiasts have been driving around and responding to community requests for birthday parades.

Last year the club attended approximately 220 parades and even attended a parade at the Alberta Children's Hospital in Calgary for a young boy there.

With an average of 12 Jeepers attending each parade, each with their own personalized, and often brightly coloured Jeep, the reaction from the community is always a happy one.

"The smiles. That's it. That's the only reason we do it,” he said.  “Because most of us are all family people we all have kids, it's to give a little bit of happiness— Make a little bit of joy in these crazy feeling times.”

Currently, with bookings already reaching into June, the anticipated return of the birthday parades has got the Jeepers preparing for a busy season ahead.

"I was very reluctant to start it again, to be honest with you, I have a corporate job in the city and I'm not home all the time. But when you get out and you do it, just the enthusiasm that we get transfers into the brain and just makes it happy.”

The Jeepers will be doing six parades a week with three pre-set times for them. The parades will happen on Tuesdays and Thursdays and can be booked by contacting their Cochrane Jeepers Birthday Parades Facebook page.

As the pandemic had affected people of all ages, the parades are open to any birthday celebration, he said, and the crew looks forward to helping brighten people's day on their special day.

“We had a parade last year for a 90 something-year-old man and the smile on his face was astonishing, just gigantic,” Richter exclaimed.