Cochrane Toyota has secured 350 sleds which will be donated to families in need of a Christmas gift this holiday season.
Nov 23, 2020 12:00 PM By: Tyler Klinkhammer 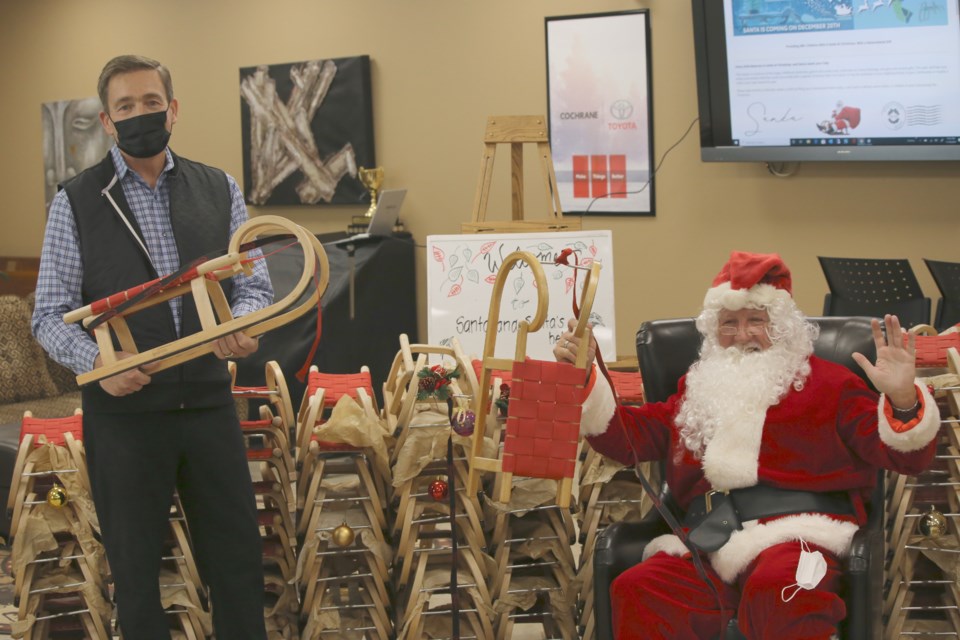 Alex Baum and Santa Claus pose for a photo in front of 350 sleds that are set to be handed out to children in need of a gift this Christmas. (Tyler Klinkhammer/The Cochrane Eagle)

COCHRANE— You can hear the sleigh bells ringing in Cochrane this holiday season.

Cochrane Toyota has acquired 350 sleds they will be giving out to preschool-aged children who are in need of a gift this Christmas.

Cochrane Toyota has partnered with Santa Claus to help distribute the sleds on the morning of Dec. 20, just a few days before Christmas, and Santa wants your help in identifying families that need a gift the most.

On Dec. 20, Mrs. Claus will also be making an appearance at the event, along with Mayor Jeff Genung, who will be wearing one of Santa’s Elves’ uniforms and giving out hot chocolate to families who attend the event.

Nominees can come from anywhere in Cochrane Toyota’s market area, which extends east of Cochrane to 12 Mile Coulee in Calgary, past Morely to Exshaw west of town, north to Sundre, and Millerville south of Cochrane.

“Whether it’s Morely or downtown Cochrane or it’s Exshaw, if you know there’s a child that’s going to have a smile because of this, that’s who we’re looking for," said Alex Baum, dealer principal at Cochrane Toyota.

The Young Professionals Rotary Club will be sorting through the nominees and selecting families that will receive a sled.

“We want to go to family services, churches, communities, next-door neighbours, and some of our homes,” Baum said. “The Young Professionals are going to help us, as the nominations come in … They’re going to select the preschool children that best deserve a gift from Santa.”

Baum said they will be staggering families that come in to reduce contact between people, and will even provide curbside delivery if necessary.

Baum said he was not aware of the details on how the sleds became available, but when he saw them, he knew he had a golden opportunity.

To nominate a family or child you think is in need of a gift this Christmas, visit sledsforchildren.ca to fill out a nomination form.