Provincial Election 2019: Q & A with candidates

In the lead up to the April 16, 2019 provincial election, the Cochrane Eagle will run a Q & A each week with the four candidates for the Airdrie-Cochrane riding.
Mar 28, 2019 1:00 AM By: Lindsay Seewalt 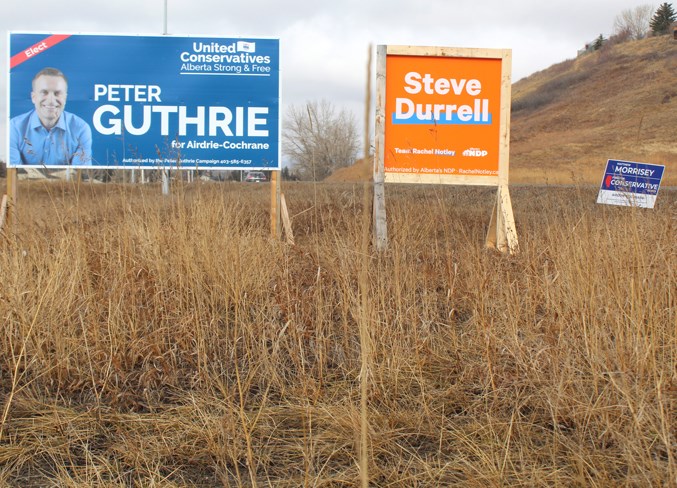 In the lead up to the April 16, 2019 provincial election, the Cochrane Eagle will run a Q & A each week with the four candidates for the Airdrie-Cochrane riding.

The questions will span a range of hot button topics such as the economy, carbon tax, health care and education, as each topic relates to party platforms.

This week, we asked the candidates to respond to two questions, centered on the carbon tax and health care. Do you have ideas for future questions or campaign stories? Contact lseewalt@cochrane.greatwest.ca.

1) Jason Kenney maintains that if elected, he would hold a referendum on equalization and turn off the taps to B.C. if the neighbouring province obstructs pipelines. Where do you stand on this statement?

Jason Kenney was part of the federal cabinet that decided and designed the current equalization formula that gave Ontario and Quebec hundreds of millions of dollars more each year. It's a bit rich for him to ask for a referendum on his own program. Is he asking for a referendum on himself?

Both actions are a part of a broader strategy to stand up for Alberta and our energy industry. The obstruction of our energy industry violates the economic union of our Constitution. Other provinces and Ottawa should not be able to block market access by stalling or killing projects that would get necessary energy infrastructure built while at the same time benefiting from transfer payments from Alberta. A referendum on equalization and turning off the taps to B.C. are tactics that are part of an overall escalation plan if we do not get market access for our responsibly-produced energy.

Mr. Kenney has once again sold us a bill of goods, which he doesn't intend to deliver. In 2017, he promised a referendum on equalization no strings attached. However, the choice he presents to Albertans now is if the pipelines are built an equalization referendum wouldn't be needed. The FCP will not present a this-or-that option. We want our pipelines built and a referendum on equalization.
To speak to the threat of implementation of Bill 12, the FCP sees this as a nuclear option of last resort. Using our oil patch workers as a pawn sacrifice would do irreparable damage to both BC's and Alberta's economy. This option should be avoided at all cost.
Vern Raincock, Alberta Party:
The proposed referendum is a waste of taxpayer dollars and a marketing stunt. The past and current federal government should have made changes to the the formula and Mr Kenney had the opportunity to make changes when he was in Ottawa at the Cabinet table when the latest formula was approved.
Question 2: Alberta spends nearly half of its provincial budget on healthcare costs. There is a range of opinion and platform promises from boosting private health care, to reviewing Alberta Health Services to increasing frontline services. Where do you stand on this?

Alberta's population has never stopped growing, even at the deepest part of the recession. That's why our government refused to cut services like health and education. We did however bring down operating expense growth in health to a manageable level, and negotiated practical agreements with labour that kept costs reasonable.

Mr. Kenney's says he will maintain health spending, but as our population continues to grow and inflation continues to raise costs, he's actually talking about a cut. I fundamentally believe that the quality of health care Albertans receive should not be tied to the price of oil, or the size of your pocketbook

The UCP has been very clear we will support the universally accessible, comprehensive health care system in Alberta and I fully agree with this principle. What is key is we are committed to reviewing Alberta Health Services within 30 days of taking office – working to find efficiencies and moving resources and capital from the bureaucracy and to the frontlines, meaning more support for nurses, doctors, and EMTs.

Albertans pay the second-highest level of per person spending on health care  among the provinces. We are the youngest province in Canada but we are only receiving middle of the pack care. This needs to change. There are several ways we can accomplish this.
1. Ensure AHS is implementing the 27 auditor General suggestions that have currently not been implemented to make AHS more cost effective.
2. Consult with and implement the practical real-world solutions our frontline workers witness daily to ensure patients are receiving safe, streamlined, and quality care.
3. Not banning practical and cost saving private healthcare options for Albertans. Result based healthcare is critical!

The Alberta Party is not pursuing privatized delivery. There are many avenues that cost savings can be found, with the guidance of front line workers, to reduce spending within the system. These experts have repeatedly offered insights and their recommendations have been ignored over the years. We will listen to the experts within Alberta and package and expedite changes that improve service and cost effectiveness through a cross functional team approach.